Steelyard Kelham: Thinking outside the box

Shipping container retail parks, or ‘box parks’ to keep it simple, have been springing up across the UK ever since Shoreditch paved the way with the first in 2011. Since then, a number of these vibrant hubs for independent businesses have opened with considerable success in cities such as Manchester, Bristol, York, Newcastle and Edinburgh. So, naturally, it wasn’t going to be too long before Sheffield got in on the action.

Of course, location is key to the viability of such projects, and the outskirts of Sheffield’s bustling Kelham Island district serves as the perfect locale for the Steelyard complex, situated just a stones’ throw from the nearby bars and foodie spots. The development fits in nicely with Kelham’s spirit of urban renewal, transforming what was essentially an empty car park into an exciting social destination and retail spot, with a large nod towards the area’s proud industrial heritage in its design.

When Exposed swung by on a sun-kissed Thursday evening last month, we were unsure what to expect. Footfall can be an issue in the area during the week, especially with a global pandemic hanging over proceedings, which left us wondering whether we’d chosen a quiet evening to schedule in a visit. But we needn’t had worried; the pleasant weather had enticed a healthy throng of post-work revellers out, most of whom were sat (in socially distanced groups, of course) outside the bars and in the suntrap courtyard situated on the second level.

After visiting one of the many sanitising stations dotted around, we headed up the stairs to our first port of call, the sleek-looking Bubba Bar and Restaurant, where we spoke with owner John Tompkins while ogling a few of the tasty-looking small plates intermittently winding their way out of the kitchen and into the courtyard – nicely presented dishes of beef teriyaki, meatballs, patatas bravas and calamari doing the rounds.

“For a long time now we’ve dreamed of opening a tapas bar,” John told us. “We were inspired by our trips to Spain, especially Fuengirola, where our favourite place was a tapas bar called Bubba Bar. So that’s where the inspiration came from; we wanted to create a relaxed space for casual dining, a nice atmosphere, and small plates done well.”

For John, who also owns the Devonshire Arms in Middle Hanley, the Steelyard container concept provided the perfect opportunity to realise a business dream, and when hearing there was also interest from the likes of Urban Pizza Co., Decks Bar, and Workshop Koffee, amongst others, he was certain that the place had the potential to succeed. Bubba Bar opened its doors for August Bank Holiday and has quickly settled into what John say is a tight-knit community of traders.

“There’s a great feel to the place. I love it. We’ve got a nice mixture of people coming in – a real blend of age groups and we’ve received fantastic feedback. We all collaborate nicely; I don’t mind if someone gets a pizza from Urban Pizza downstairs and comes to sit up here with it. We’re all supporting each other at the end of the day.”

That tangible sense of community is something that Bubba Bar’s next-door neighbours Indie-Go also enjoy about being at Steelyard. The bar was the brainchild of pals and indie music fans Andy, Faz, Brooky, Tom and Roy, who’ve turned their unit into something of a shrine to indie legends with assistance from local artist Paul Staveley. An impressive mural to one of the city’s finest musical exports, PULP, immediately grabs your attention, while you’ll find a few more rock ‘n’ roll icons and references on show throughout the venue. 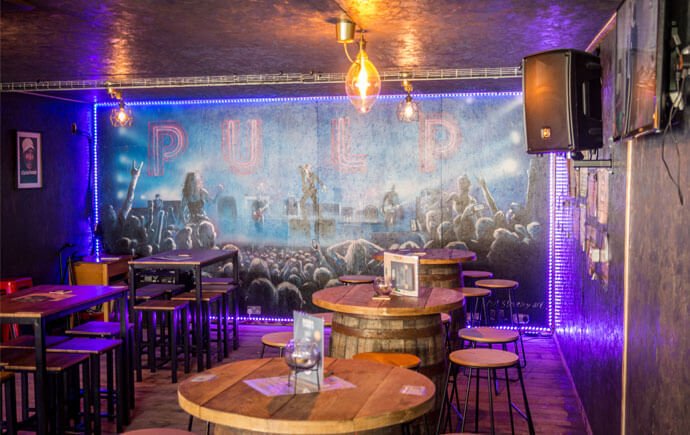 In a city known for its guitar music, the lads wanted to recreate the sort of place they would choose for a night out. “We spoke about the brilliant nights we had at places like Casbah and Green Room, and now they’re gone we think there’s a bit of a niche there for it,” said Andy. “Weekends have been great since opening, and we’ve recently launched a couple of events during the week to get people in.”

Those events include Steel Jam – an open mic event every Wednesday, 6-10pm; and a live comedy night, That’s Entertainment, which will take place on the final Thursday of each month. On the weekends it’s a more straightforward case of grabbing yourself a beer or perusing the “rocktails” list and unwinding with the lovingly curated playlists on offer.

From indie bangers to chilled house sets, completing the trio of bar offerings on the upper level is Decks – a little slice of Ibiza terrace paradise brought into the heart of Sheffield. Decks opens out nicely onto the picturesque courtyard spot, where drinkers were taking in the golden hour sunshine while the DJ soundtracked the evening with some deep lounge house beats.

Original plans of garden parties and a bring your own vinyl policy had to be revised due to Covid-19, but owner Adie Garcia-Marshall says they’ve still managed to create a good vibes spot with bags of potential for the future. “We’ve had some fantastic support from the community,” Adie told us. “This is my first experience in opening a bar, so we’re learning and growing, and that goes for the whole development too; we have new businesses arriving all the time and it just feels exciting.”

Keen to showcase local talent, Decks are committed to programming Sheffield DJs, they keep things fresh with seasonal drinks menus – negronis appeared popular on this particular evening – and for the colder months there will be a canopy, heaters, rugs, and warm JD and honey cocktails to create a toasty setting. “We’re building a community,” says Adie. “We’re all independent businesses who help each other out, and the different types of food and music on offer all comes together and brings in a great crowd.”

On ground level you’ll find the heart of Steelyard’s foodie offerings, and no street food haven is complete without a solid pizza joint. Thankfully, in Urban Pizza Co they’ve got one of Sheffield’s most innovative dough specialists, knocking out specials like their Chicken Tikka Pizza to the Mexican-inspired El Mariachi, where everything, right down the base sauce, is made fresh and in house.

Urban Pizza sits nicely alongside their Urban Entertainment brand, which specialises in outdoor cinema and events. Plans are underway for cinema nights in the yard in the not too distant future, and MD Michael Hayes told us that so far, even with challenges posed by a pandemic, the reception for the pizzeria has been fantastic and they’re already looking forward to taking the next step.
“We’re excited to utilise the yard space, and you can sense the place is going to grow even more in terms of businesses coming in, but right now we’re focusing on our pizzas and brand new dessert menu we’ve launched. We’ve got an incredible Torta Della Nonna, Chocolate Fudge Brownie and Panna Cotta arriving on the menu which people can now come and try.”

It’s amazing what you can do with a storage container in terms of interior design, as each unit at Steelyard has its own distinctive look and feel; none more so than Icarus & Apollo, purveyors of internationally inspired vegan and vegetarian eats. After sampling various cuisines on their travels around the globe, owners Holly and Campbell returned and set up the business as a food vendor focusing on providing an exciting, sustainable menu – with many ingredients grown and sourced right here in Sheffield. Inside there’s a homage to the retro caravan they started their business out of, travelling up and down the UK, slinging out everything from Buddha bowls and curries to quesadillas and wraps. 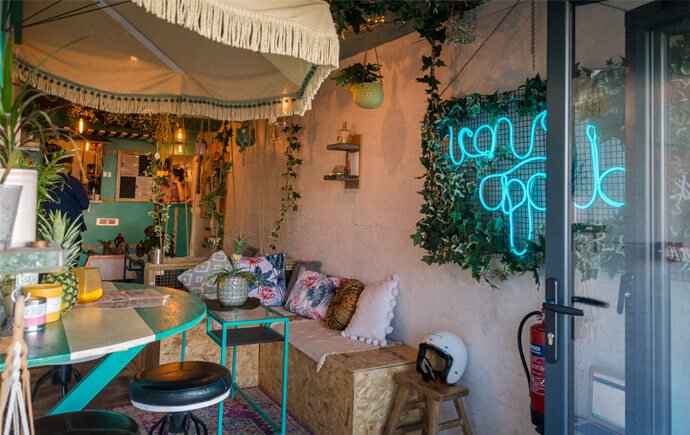 Fuelling proceedings are Icarus & Apollo’s recently arrived neighbours, Workshop Koffee, owned by best friends Leanne and Lynsey and open seven days a week for your breakfast, brunching and lunching needs. There’s even an afternoon tea offer that you can take advantage of (pre-bookings only), and if you’re looking for a spot to hunker down and get some work done, there’s free wi-fi and charging points on-hand. Not to mention a constant supply of superb coffee to keep you going.  Lynsey told us it was the potential of the area and seeing the development underway which convinced them to get involved. “We came down to have a look right back in the early days, when they were just starting to work on Bubba Bar, so we saw all of that underway combined with the location being in a part of Kelham Island which could work nicely and just thought, this could be really good. There’s a nice eclectic mix of traders and the clientele coming in have been superb.” 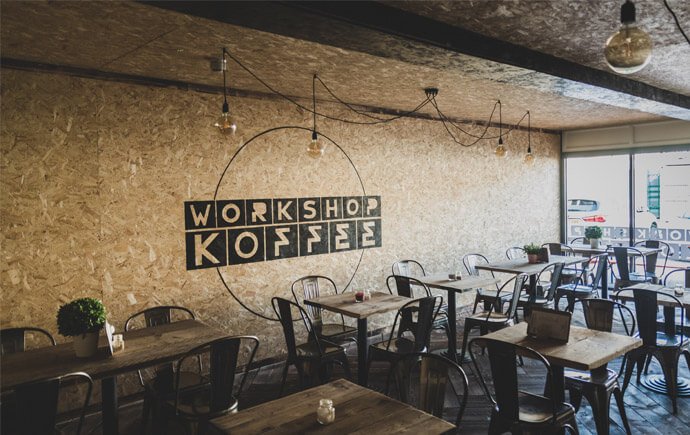 After finishing our brews, stomachs were beginning to rumble, so we headed back across the yard and ordered gyros wraps from Greek Gods’ Cuisine, who serve up a mouthwatering menu of authentic Greek street food from their van. Heading back upstairs to sit outside Bubba Bar with a drink, our food arrived a few minutes later, just as the sun was beginning to set behind the Bardswell Road development. Sheffield’s first box park gets a big thumbs up from us, and with the need to support independent traders now more important than ever, we’d strongly recommend popping down to sample the atmosphere and tasty delights on offer when you get the chance.

With the UK government’s roadmap this week stati

Our @sarah_haworth_ has been snapping some of her

Sticking with our favourite Sheff album shouts, he

What's your favourite Sheff album? We asked a coup

Huge shoutout to the team at @lavang_sheffield cel

PROPER looking forward to welcoming back some of o

How chuffin' good were @slowclubhq? 😭 This pic

Rafters Sheffield has been top of the Steel City fine dining game since the 90s and it'll be back with a whole host of innovative new dishes to treat foodies with in May. 😋 ... See MoreSee Less

Rafters is a Steel City icon. Guided by the Bosworth brothers, it burst onto the restaurant scene in the 90s, and..
View on Facebook
· Share