It came as no surprise to me when I overheard some people leaving a Sensoria show this year, saying they’d never seen anything like it before.

The unusual comes as standard with Sheffield’s very own digital, film and music festival, the show they were talking about was the music of Morton Feldman, played by Philip Thomas in the Upper Chapel. He played it on a piano, but before he did, we were treated to a couple of rarely screened documentaries about modern artists Jackson Pollock and Willem de Kooning. Feldman had composed the soundtrack music.

If, like me, you know little of Morton Feldman’s music, I would urge you to have a listen. It is the most delicate, beautiful, almost ethereal music, perfectly suited to the newly refurbished Upper Chapel. But it does take a deal of concentration to appreciate it. For an hour in the second half, the music  gently drifted around the room, with more silence than there were actual notes being played, but therein lay the beauty and the hidden levels of complexity. Like some beautiful painting, which you could only see a small part of at one time, the beauty of the whole piece was gradually revealed as the piece was played. And it was pretty well attended too. It’s perhaps not surprising that this demanding, yet extremely rewarding music, has its fans.

Another event event that was a first for Sheffield was a concert by Holly Herndon in the Foundry. Electronic music seems to have a history of attracting innovative women, in fact Delia Derbyshire is today recognized as one of the pioneers of music created electronically. Sadly, she didn’t live to see her name become celebrated, but she paved the way for artist like Holly. She is an American musician, composer and sound artist, now based in Berlin, itself a city with a reputation in the world of synthesised sound. Despite being electronic in nature, her music always incorporates voices – both hers, and those of the three women onstage with her. Each song had its own unique combination of vocals and sounds. No two pieces of music sounded similar. They ranged from pure, untreated vocals, to dance tracks created from nothing more than singing, It was a compelling set, and was totally unlike anything I’ve ever seen in there. 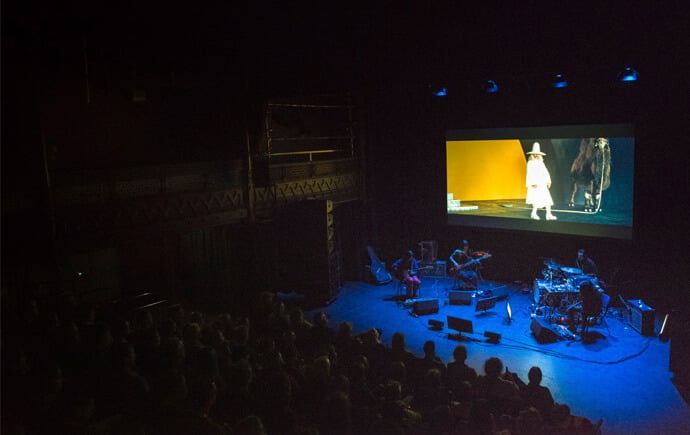 The commitment to visual art was evident at the start of the Sensoria week, when they staged an exhibition of work by local portrait photographer, Chris Saunders. His work ranges from the internationally famous images of Peaky Blinders and David Lynch, through an iconic photo of Jarvis, Hawley and Alex Turner, to relatively unknown Sheffield street artists and musicians. I managed to get to the opening night, and Chris himself was there, as were several of his subjects, who had great fun posing for photographs next to their own images on the wall. The exhibition, entitled Shine A Light, was in Trafalgar Warehouse for an all too short time, but the queues outside when it opened each day were testament to how Sheffield appreciates his skills as a photographer.

One more highlight I’ll mention was a performance by Bo Ningen, in the Drama studio, as they provided a soundtrack to Alejandro Jodorawsky’s film, Holy Mountain. It was a trippy, and highly controversial follow-up to the much more well known film El Topo, and is as astonishing today as it was when it first made an appearance in Cannes in 1973. Bo Ningen’s psychedelic noise filled rock soundtrack, perfectly suited the collage of surreal, sacrilegious and at times truly shocking scenes. The central character starts by undressing two symmetrically arranged women, and shaving their heads, in a geometrically perfect room. He is then chased by young boys with their genitals painted green. almost crucified and rescued by a limbless midget. After that it got weird. An unforgettable film, with a loud and forceful soundtrack, neither of which could possibly be ignored and all made for a compelling evening.

These are just a few of the sometimes weird but always wonderful world of the Sensoria Festival. There was, of course, so much more, but this will perhaps give a flavour of what this festival has become.