You will always find them in the Kitchen at parties.
Pickled Pair checks out if fundraising and food is a match made in Heaven or Hell.

No, I’m not pushing kitchens for IKEA – I’m talking about Sheff’s Kitchen, an event where two of Sheffield’s most highly regarded chefs went knife-to-knife all in the name of charity (the splendiferous Whirlow Hall Farm Trust, in case you are wondering).

Delia of the North (Lee Mangles, Head Chef at Silversmiths) and Heston from the Hills (Simon Ayres, Head Chef at the Showroom Cafe Bar) put on a fabulous feast and show for us. And cranking up the heat in both kitchens was none other than the mighty Gordon Ramsay. OK, so it wasn’t actually him, but Martin Jordan gave a good impression of Hell’s finest. 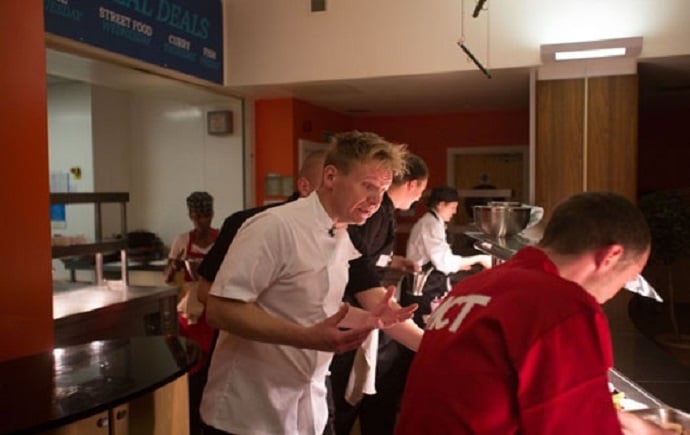 Hosted at Sheffield Hallam University and sponsored by Wosskow Brown Solicitors and Moorwood’s Charitable Trust, Sheff’s Kitchen got off to a great start in the bar serving up Thornbridge and, of course, Gordon’s & Tonic.

With Mangles in the red kitchen, Ayres in the black and our tables themed to suit, we were revved up for this gastronomic feast. First thing out was – dare I say – King of the evening for me. Bread and dripping. This wasn’t just any bread and dripping. Oh, no. This was beetroot and cumin bread spread with meaty, savoury deliciousness. It was good. Very good.

Next up, mutton – Ayres delivered a very pretty tortellini and Mangles a slow braised and rolled tender dish. I do hope the farm shop at Whirlow will be putting mutton in the butcher’s window – it’s the new trad, for sure. 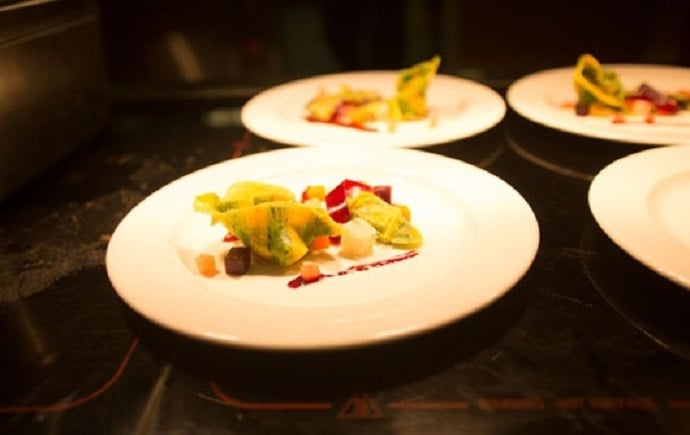 Main was pork. That sounds straightforward, I hear you say. Ha, not if you happen to be working in the kitchen with Lee. It was pork four ways. To you and I, that’s loin, pressed ham, bacon and black pudding. If you read my first post you’ll know I haven’t touched black pudding since I was eight years old. I felt compelled to give it a try. I liked it. I may even have it again. That’s one gigantic leap for Pickled Pair! Team Ayres served up boudin, belly and a black pudding fritter. Belly was the star of the show for Mr D, but then he’s a closet bacon curer with a particular fondness for the streaky stuff. 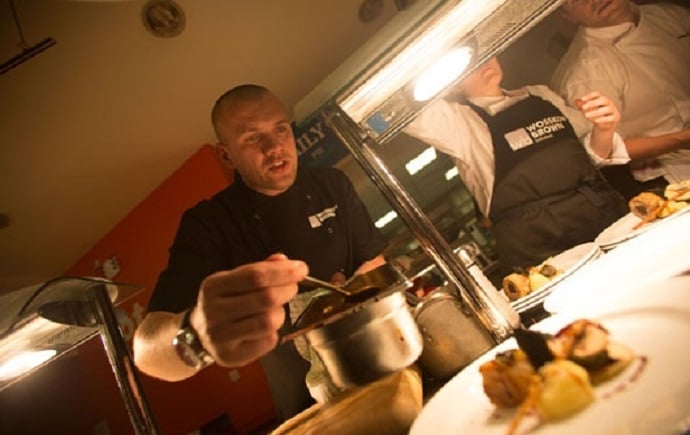 I should say at this point that both chefs were cooking with Whirlow’s own produce and it was only two days earlier that Sam, the farm’s operations manager, had ceremoniously deposited half a pig to each chef with a ‘there you go boys, now go make me a menu’. They did not let him, or us, down.

We had to score each dish. That was a tough one as I loved both first course and main equally, all four of them! However, there was only one pud for me and that was from team Ayres, and not just because star creator (Lisa Curran, pastry chef at the Showroom) happened to be sitting on the same table. It did have a lot to do with the Madagascan vanilla cheesecake and everything to do with the raspberry choc-ice and macaroon that went with it.

After days of prep and hard graft, these two talented chefs and their brilliant teams (including Hallam student chefs) delivered a great evening. It was a close run thing, however, there could be only one victor at Sheff’s Kitchen.

Take a bow, Team Ayres, you were deserving winners.

Mangles crew, though, were hot on your heels so I have a feeling the 2015 Sheff’s Kitchen showdown is going to be exciting.

Sheff’s Kitchen raised over £4,000 for the trust thanks to the generosity of sponsors, chefs and volunteers on the night and, of course, the food-hungry diners of Sheffield. The money raised helps give Sheffield kids access to the countryside and a chance to learn more about where their food comes from. It was food with a conscience in every sense.