People Power: Spending a morning with the S6 Foodbank

On a grim Tuesday morning in mid-January, amongst the swirling wind and rain from Storm Brendan, we meet Chris Hardy – manager of the S6 Foodbank at St Thomas’ Church on Gilpin Street, just off of Penistone Road.

He’s marching back and forth from the stock room across the road from the food bank centre, arranging signs and readying his volunteers for the first of two food drives this week. It’s hammering it down and he’s wearing a t-shirt, but still has more than enough time to welcome us warmly to the food bank just as it opens.

In November of last year, the Trussell Trust released its ‘State of Hunger’ report which estimated that in 2018-19, at least 3m food parcels were given out to people in need. More than half a million were given to children by the charity.

The charity, which looks after 1,200 food bank centres across the country, released figures which stated 36% of people who need emergency food parcels cite insufficient benefits payments. Whilst 18% cite a delay in the payment of benefits and 16% say a sudden change in benefits leaves them with no money for food to feed themselves and their families. 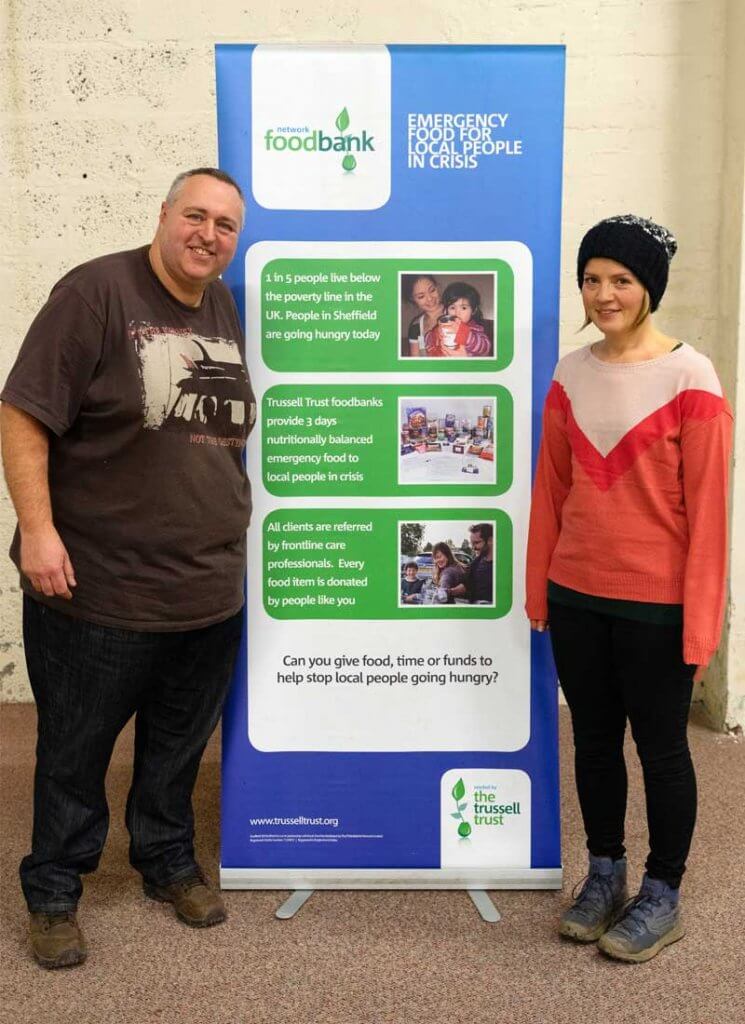 This isn’t right. This is a national problem and quite frankly, a disgrace. The UK’s economy, which is currently the sixth largest in the world, has shrank and withered and grown following two and a half years of political uncertainty, the result of which appears to have had an adverse effect on those who need the benefits system and food banks to survive. People like Chris Hardy, who manages the S6 Foodbank along with some 80 plus volunteers, offer a safety net for those who are neglected and left behind by the current system.

“It’s not as though they’ve got money in the bank or family to rely on, the real problem is not having that safety net around you and that’s what this food bank is and what it’s there for,” Chris tells us. “We’re here just to give a crisis amount of food. The benefits system is a struggle at times, especially for the people we help. It works perfectly for 80% of people, but the 20% it doesn’t, it’s a long time that it doesn’t work for them. People say it’s about five weeks but the reality is it’s more like eight weeks and to go two months without any food in your cupboard and without any money in your pocket is a real problem and a real struggle for people.”

Chris works with 142 front-line agencies who make a decision on whether a person is in need of an emergency food bank voucher and where they can collect their food parcel from. “We’ve got this site here on Gilpin Street, we’ve got another site on Hannover Way, one in Crookes and one in Winn Gardens as well. It’s S6 and the surrounding areas. The important thing is they can come and sit at a table, have a chat and have a tea or coffee. 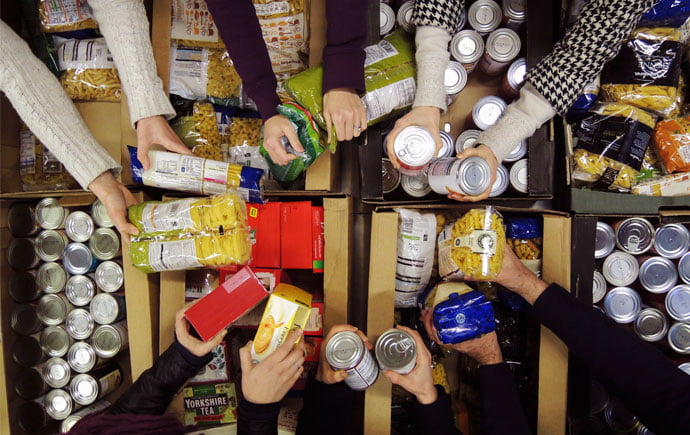 “A lot of people we see are quite isolated and don’t tend to talk to people. We have a chat with them whilst we’re packing their food for them. We don’t have any food parcels pre-packed; it’s all about their dignity. We try to make the food parcels fit their diets and needs. Some people, if they aren’t from this country, don’t like certain foods so we try to make it fit their diet as best we can.”

The Trussell Trust was founded in 1997 by Carol and Paddy Henderson based on a legacy left by Carol’s mother, Betty Trussell. The charity’s initial projects focused on improving conditions for the 60 plus children sleeping at Central Railway Station in Bulgaria. In 2000, Paddy received a call from a mother in Salisbury in the UK about her children who were going to bed starving that evening.

Paddy studied data on poverty in the UK and found that huge numbers of people faced going hungry as a result of a sudden crisis. Paddy started Salisbury Foodbank in his garden shed, providing three days of emergency food to local people in crisis. The charity’s network has grown ever since, and now offers additional support to help tackle the root causes that sweep people into poverty and build people’s resilience so they are less likely to need a food bank in the future and avoid such crises. 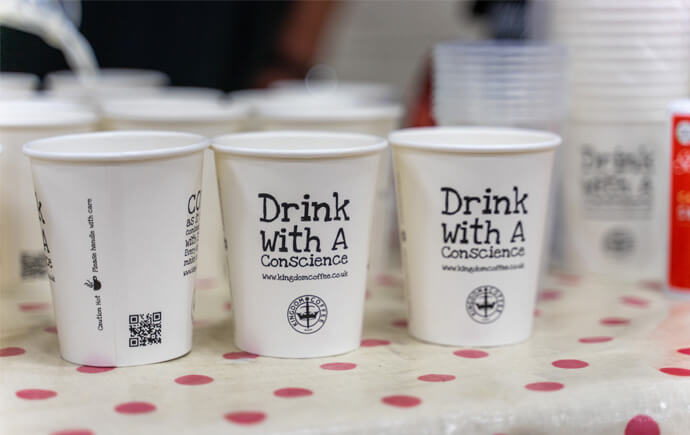 “Crisis is interesting because when we first started we were doing three days and three vouchers,” Chris tells us. “But now our average voucher per person is just under five because of the length of time people have to wait to see the services they need to. The longevity of people’s needs has just grown and grown. I don’t see any value in stopping someone’s vouchers after three weeks of coming to see us because we want to see them through to the end of their problem or whatever it is going on in their life.

“That’s why we’ve got the hub services here. We’ve got Shelter, life skills, job club, because you want people to be integrated back into the community. That’s my big thing, community. Community helping community is my big aim. That gets harder when we go through 100 tonnes of food every year and the need for that grows.”

That need, according to the charity’s figures, goes up 17% every year. That’s a huge amount of humans who are simply being failed by the current system in place. “The really important thing is we’re trying to get them out of their situation and we listen to what’s going on in their life so we can work out where to direct them in the local area,” Chris adds. “It’s really important that together, we’re working as a community. We’ve got around 80 volunteers that come and help out every week which is really, really amazing. They come just because they want to help the person who lives next door to them.”

The official line from the government is denial that its policies and behaviour don’t contribute to the need for food banks. “We spend £96bn a year on welfare and 95% of payments for Universal Credit are made in full and on time,” a spokesperson said to the Guardian recently. It’s a response that resolves all responsibility for itself, leaving the very people it’s meant to be looking after to fend for themselves. Chief executive of the Trussell Trust Emma Revie said following the 2019 General Election: “We must start putting money back into the pockets of people who most need support, by ending the five week wait for Universal Credit, ensuring benefit payments cover the cost of living and investing in local emergency support for people in crisis. 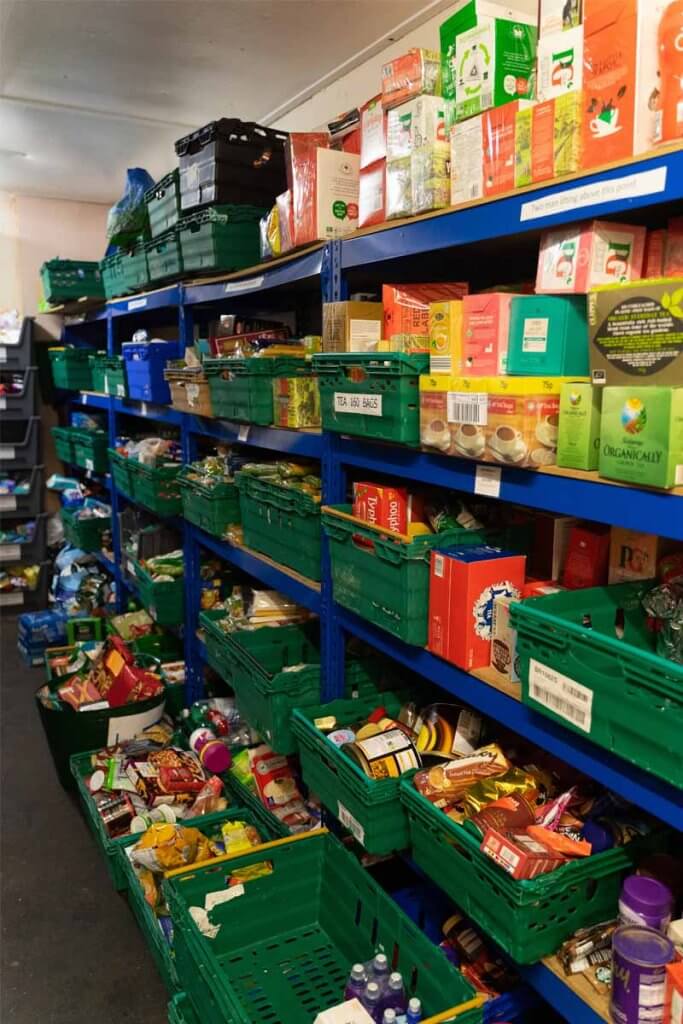 “It’s in our power as a country to end the need for food banks. But if we’re to get there, we need our new government to act. We’re ready to share evidence from our network of food banks across the UK, and we’d encourage any new MPs to speak to their local food bank about why people are being referred for emergency food. It’s not right that anyone should have to turn to charity for the basics – this can change.”

Whilst we chat to Chris on the door of the S6 Foodbank on Gilpin Street, he warmly greets people from all walks of life into the centre. There are young women with prams, older people on their own sat at the tables and people making use of the free coffee facilities. You wouldn’t think this was a centre for crisis, but Chris and his team of volunteers have made it a welcoming community. It’s a nice atmosphere. and it’s busy. “We’re always busy. It’s been a mild January. Over Christmas we had 17 tonnes which works out to 41,000 meals, which is great and it sounds like there’s a lot of food but the reality is that won’t get us through to February. It is amazing don’t get me wrong, but the need goes up 17% every year so we have to meet that need somehow. We’ve started accepting cash as well, places like the Milestone donate and Sheffield Wednesday donate a lot.”

The very existence of a food bank is a bittersweet – it’s incredibly frustrating that vulnerable people are left to seek crisis and emergency help, but it’s heartwarming that so many people from around the UK support the charity. The support from local businesses and the local community is something that Chris is clearly thankful for. “Let’s be honest, nobody wants to see food banks but everyone wants to help. Most of us know someone who has been in debt or in a crisis at some point in their life and anybody could be so close to using a food bank. When you know that reality, you have that compassion and are more than happy to donate. I really believe in local people helping local people.”

Shoutout to @kunstity for providing the cover to o

Tomorrow night at 7pm you can watch a special Festival of Debate live stream on Cliff Edges and Safety Nets. This event asks how best to continue supporting those most in financial need – amidst and beyond the coronavirus pandemic.

Tune in if you can. ... See MoreSee Less