Interview: Jim Connolly on new comic book ‘Made of Steel’

Jim Connolly is an illustrator from Sheffield, currently residing in the outskirts of Manchester. You might have been drawn to a pint of delectably dark Night Rider stout in your local pub thanks to his work designing logos for Kelham Island Brewery, or perhaps you’ve seen his collection of Steel City prints in which Sheffield is brilliantly re-imagined through a comic book lens.

It is this unique style, often humorous and with a dark edge, that Connolly has become best known for. His latest project, however, a comic book called Made of Steel is something with a distinctly lighter tone. “I didn’t want to make something that only appealed to fringe-dwelling weirdos like me,” he jokes. “I wanted to make something with a broader appeal, something that mums can read to their daughters.” Last month I spoke to Jim about his new project, the influences on his work from films to family, and how he has fared creatively during lockdown.

Hi Jim! Can you tell us a bit about how you started out as an artist and started developing your distinct style?
After doing my degree in Illustration and Animation at Manchester Met, I was working in E-Learning. But as I played in bands, I ended up doing a lot of work for bands on the side, alongside other more creative stuff. I didn’t think I could make a living out of it at first. But then I started making art prints about Sheffield. That sort of stuff has become quite popular now, but it was pretty new at the time with the likes of myself, Kid Acne, and Jonathan Wilkinson starting out. As I did more freelance work, I gravitated more and more towards the comic book style as that’s what I enjoyed the most.

There is a recognisable darkness to some of your work and you describe your style as “primary, fun and eye-catching, but also edgy”. What are your influences?
I grew up in the 80s reading DC comics and although I liked Marvel, DC was the darker brand and I enjoyed that. Then there were comics like 2000 AD, which felt like a horror movie you were allowed to buy as a kid. I’ve also been influenced by genre films. I like Frank Miller’s style [Sin City] and the darker Batman stuff, but I’m also into sci-fi and horror – super stylish films, Tim Burton’s stuff is also great. Any director who gets a great palette into a film. Ultimately, I like things that have a vintage look, that’s what I go for, a less-is-more style. 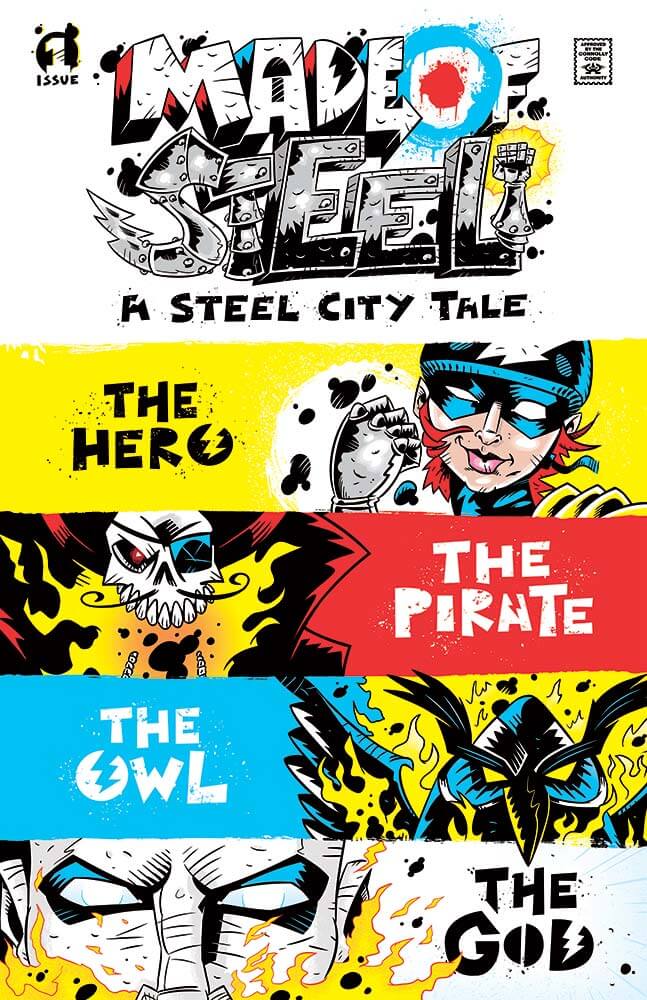 You’ve got a new comic book in the making called Made of Steel, which is launching on Kickstarter October 1st. What can you tell us about the story?
It’s about a girl, Roisin Sharman, who uncovers a scroll in a Sheffield park when she’s out with her dog. Reading the scroll, she summons Vulcan, aka ‘Hephaestus’ (God of the Forge). He’s the figure who dons Sheffield City’s crest and seemed like the perfect mentor figure for Roisin. He trains her up as Steel Bolt, a hero and protector of Steel City (an alt-universe version of Sheffield). She’s learning the ropes and fighting low-level crime until derby day, when she must face two titans from the Steel Talons and the Crimson Cutlasses in a stand-off battle to protect the city. Like the first Star Wars film, I wanted to capture a story that was joyful and full of hope, but with threats that felt real. I also wanted to capture the average day in Sheffield and imagine her amongst regular people and how they would react. Sheffield features heavily in the story. When the titan figures come down from the sky, one takes out the Hendo’s factory and the other hits Kelham Island Brewery. But don’t worry! I also resurrect old places like Tinsley Towers.

I love that your hero is a teenage girl, and she has a refreshing look with her short, red hair and punky style. You describe her as “fearless, with sharp wit”, and “too cool to stick on some stupid leotard/bikini”. Who or what inspired this female superhero?
A couple of years ago I went to see, Spider-Man: Into the Spider-Verse, with my daughter Roisin (Steel Bolt is partially named after her). It really felt like a modern comic book film for all ages, and my daughter loved Spider-Gwen, the female spiderman character who I think really stole the film. She was a strong female superhero, like Captain Marvel later, who was almost like a badass biker girl. I was influenced by those sorts of characters, but Steel Bolt is also based partly on the Elastica guitarist Donna Mathews and the cool girls down at the Leadmill in my Sheffield clubbing days. Then the latter part of her name was chosen after Sheffield astronaut Helen Sharman. She really got some stick at one point as it was written that Tim Peake was the first British astronaut in space, but he wasn’t; it was Helen Sharman.

There is an emphasis on narrative and storytelling with all art, but comic book art in particular. Do you consider yourself a storyteller as well as a visual artist?
Yes, I think I do consider myself a storyteller. With the book, I wanted to keep the narrative fun and not overly complicated, but what I’m really interested in is how an image can tell a whole story. Like with my art prints, for example, the one I did of John Cooper Clarke, I tried to tell the story of his career in one image. I’m really proud of it, it’s one I look back on down the line and still really like.

You are clearly very inspired by place, and Sheffield in particular. You live in Manchester now, so why the creative pull towards Sheffield?
I suppose I see Sheffield through rose-tinted glasses. I grew up here, but I also travel here a lot for fun, work-related stuff now. My band is also Sheffield-based, so I come back here to pretend to be a rock star for the afternoon. Sheffield will always hold a special place in my heart.

What about music, are you influenced by it? I noticed a couple of references to Kurt Cobain in your work.
Music is massive for me. As a teenager in the 90s, Nirvana were a big deal. They really celebrated the underdog. They were also at the forefront of that DIY aesthetic, not just in their style but in their ethos. I suppose I was influenced by that DIY mentality, the idea that you can be your own publisher, or put out your own music. There’s a band I’m into at the moment called The Lovely Eggs, their doing a lot of that. 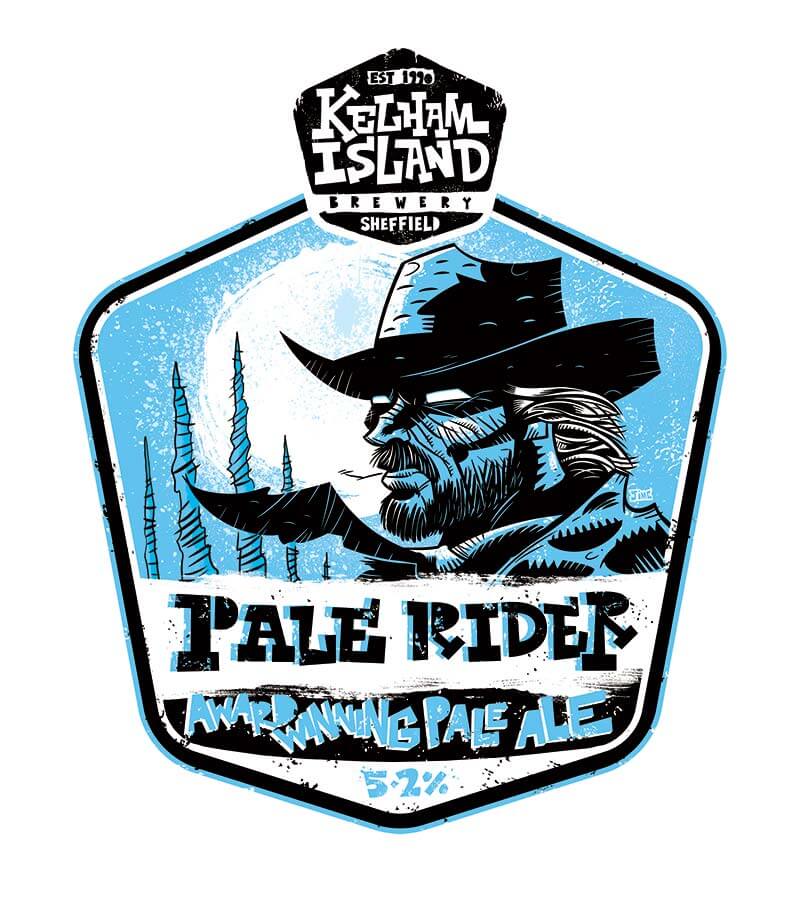 “I grew up here, but I also travel here a lot for fun, work-related stuff now… Sheffield will always hold a special place in my heart”

Speaking of DIY, you are using Kickstarter, a crowd-funding platform, for Made of Steel. What made you chose that platform?
Of course there’s the financial element, and this is a way of doing things minus ‘the man’. But it also seemed like a great way to reach a wide audience. I like the idea of involving people in the process. For instance, I want to get people’s faces in the comic. I had the idea that someone could be drawn into the comic scoring the winning goal on derby day. I also think it’s a good platform for introverted types; it feels really supportive.

How has lockdown affected your creativity? A lot of artists and creatives find their work to be an outlet in difficult times, would you say that has been true for you during the pandemic?
It has been a rough year. There’s been the pandemic and less work coming in, but I also lost a sister earlier in the year. The comic was a great outlet, it’s given me something to throw myself into, something positive. I remember years ago when my dad died, a band Jarvis Cocker was in ended up using some of my work and it felt really special, it was really uplifting at the time. Creativity has always helped me get through crap times. It gives you a purpose, you know? It gives you hope.

Jim’s Kickstarter campaign to bring Made of Steel to life hit its target earlier this month. Head here for more info on the project.